Where's a Camera When You Need One?

Today, e-baby had her first trip to the dentist. She was cautiously optimistic about the whole thing, and sat on my lap on the chair at first, watched a little Barney, rode up and down, and took a little tour of the "treasure box." After that, she sat in the chair by herself while the hygenist counted her teeeth, looked at them with a mirror, and brushed/flossed them. It was very, very exciting, but she was a little shy. When the hygenist put on her mask, it was "Oh, no, lady-- keep your face right where I can see it, thank-you-very-much."

After her checkup, they let her pick a toothbrush and a prize from the treasure box. She chose a shiny-silvery plastic set of fairy jewelry: a tiara, a wand, a ring, and a bracelet. She tells me that now she is a real fairy.

After the dentist, we continued an old family tradition of going to Wendy's for a frosty. They serve the same delicious frosties and apparently they also play the same music as they did in 1979. Fly Robin Fly, Slow Ride, the disco version of Beethoven's 5th symphony. We spotted not one but TWO fire trucks out in the parking lot while we were eating. On our way to the car, we stopped to look at one of them, and a REAL fireman came out, gave her a sticker, let her sit in the driver's seat and turn on the lights, showed her around the inside of the fire truck and (ahem) admitted that no, they don't *really* have a fire dog named Sparky, he's just a dog on the sticker. Still, it was teh AWESOME. The fireman's name was David. He was probably just waiting for lunch. He is our hero.

It was so much fun that she didn't even cry when I took her back to school for nap-time. When I left, she was bragging to her teacher about the fireman and the truck.

If you'll pardon the cliche, seeing so much stuff through the eyes of a child makes the whole world seem like it's coated in sugar and spice.

Oh, and the title of this post? I didn't have my camera or my phone, and there were probably a hundred Kodak moments. So instead, I got a picture after we got home so you could all see the fairy jewelry. And e-baby's latest shoe-fashion statement. 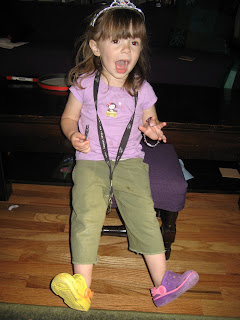 Very cute little fairy you have there! I am hoping Miss C's second trip to the dentist (did the first at 18 months due to so many teeth! Boy that one didn't go over all that well) goes well in June. I like the idea of a frosty at Wendy's though! We always go to Mitzel's or McD's for lunch after doctor's visits.

She's the Mardi Gras fairy! Or the LSU fairy? She would be a hit in either place. Love the capri pants :-)

Good look! Has she been taking fashion advice from her Tia Panchita? She could do worse than becoming a university professor!
I can hardly stand that those two are doing things without my seeing them in person every day!
Love, Mom

The Frosty from Wendy's grosses me out. I liked them as a kid, but at some point I saw what one looked like after it melted, and uh... no. Haven't had one since. That's a cool idea, though, we'll have to come up with some sort of special treat idea for after doctor/dentist visits.
I'll bet the fireman probably has no idea just how much he made her day. That's so cool.
Love the pic with all her bejeweled-ness. And good grief, how many pairs of crocs does that kid have??

I like Mardi Gras fairy. She's really into NOT matching lately, and will go to great lengths not to match. Actually, everything is about rebillion right now, so I had to make her think it was her idea to go to Wendy's. But that's a whole other blog post.
She has a ton of crocs, partly because they're $5 knock-offs and partly because they're so darn practical. I own no crocs.

I don't own any crocs either. I don't trust shoes that you can clean by tossing them in your dishwasher.

I tried putting one of her pairs of little crocks in the dishwasher once, they didn't come clean. So, yes it can be done, and no it doesn't do anything.
On a small child, crocs (mocks) are great.