Returning From Another Planet

My excuse for all but giving up on blogging? Well, it's multifold.
* Life got too hectic.
* Nobody's reading blogs these days anyway.
* I say the little stuff on Facebook instead
* I rarely have the necessary 30 minutes alone and uninterrupted with my laptop to write a proper post.
* When I have 30 minutes to be alone and uninterrupted, I usually fall asleep. Or respond to work emails.
* Sometimes, things I have to say are a little too private to talk about on a blog.

But sometimes, I really miss this little blog. So I'm paying it a visit to get some stuff down for posterity.

E-baby is 6 (and in Kindergarten). She's doing fabulously well and has taken to reading and writing like a fish to water. She reads everything -- bedtime books, newpaper comics, tabloid covers in the line at the grocery store, job recruiting ads in trade publications, you name it.

Jambuca is 4, and let's just say he's a handful. Everyone tells me it's because he's a boy, but if that's true, then why aren't all the boys his age getting into so much trouble with the teachers?  So we've been testing some hypotheses about environmental causes of inattention, irritability, and restlessness. So far taking out FD&C food colors from his diet is promising. It isn't the only thing, but it's the only one so far that's unusual (we've also identified sleepiness and hunger as prime causes, but that's true of all kids). I have an unconfirmed suspicion about honey as well.

I'm getting creative with recipes to replace some of his favorite Red#40 foods. This morning, I lucked out on one that would be beneficial to any parent, regardless of whether they are avoiding food coloring.

Jambuca loves hot cocoa. Specifically, he loves marshmallows in his hot cocoa. Well, marshmallows have artificial color in them (Seriously! Go look. Blue.). I found some at Whole Foods without food color, but I also don't like him to eat so much sugar. So this morning, I wanted to fix him a hot cocoa using the Whole Foods cocoa mix (without marshmallows) and use milk instead of water for the extra protein. Well, being lazy, I decided to try hot water from my teakettle mixed with nonfat powdered milk instead of heating up a glass of milk. Here's the recipe:

When I mixed it all up, the milk powder went lumpy. I stirred and stirred and stirred. The best I could get was little fine-gravel-sized lumps of milk powder. I thought, "Dang, now I have to strain it!" but then I decided to taste one of the milky lumps. Well I'll be darned, it tasted exactly like those weird little freeze-dried mini marshmallows they put in Swiss Miss. Not crunchy, of course, but chewy-gooey, just like mini marshamallows that have been stirred around in hot cocoa. The white lumps mix with little brown lumps from the cocoa powder that didn't dissolve completely. Eventually, they melt into a velvety smooth foam, just like mini marshmallows. 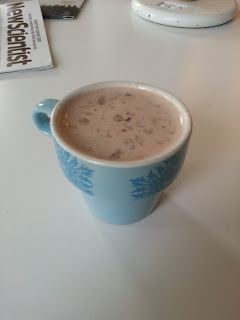 And he loved it. LOVED it. Drank 3 (demitasse) cups.
Sometimes it takes a lazy shortcut to make a major discovery.