edited to add: Oh, well, I spoke too soon-- I got the stomach bug, too. More fun to go around! My house might be quarantined until the end of my maternity leave.

Well, all of the positive healthy thoughts must have helped because so far, Jambuca is in good health, and e-baby is completely recovered. I can't really say the same for everyone in our household, though. My mom caught e-baby's intestinal flu and I caught her cold. SNG hasn't caught anything yet, but I probably just jinxed him by saying so.

In other news, yesterday was Jambuca's due date, so he is now gestationally 1 day old! Woo! So here's an update.

He can roll onto one side on his own. He started doing this when he was only a few days old. Yes, he is a strong little guy, but more than that I think it shows just how badly he wants to be sleeping on his side.

He tracks people's voices in coversations with his head, and seems very intent on listening to everything. Which is really cute, because it look like he's paying all this attention to what everyone is saying. You half expect him to jump into the conversation.

His binocular vision is developing well-- he rarely goes cross-eyed anymore. Too bad, because the cross eyed thing is great entertainment.

He still sleeps almost all of the time, and he is still a very noisy sleeper. He squeaks, hums, and grunts almost constantly. When he is awake, he is quiet and observant.

He is a very different temperament than e-baby, in a lot of ways that make him a crazy-easy baby to care for. He is just more laid back overall. I could tell this difference when he was in my belly, too-- she was a kung-fu fighter, and he practiced t'ai chi. It's the same moves, but different speed and intensity. It will be in his best interest to keep that temperament for the long-term, if he wants a peaceful relationship with his big sister.

E-baby is, by the way, doing very well. She is still completely crazy about baby brother, and seems to have mostly forgiven us for being so lame about making her wash her hands all the time and hug him gently and so on. In fact, looking back, I think all her rage and pestilence was more the result of rocking a cold and a stomach flu simultaneously than the result of our new household member. Having experienced at least her cold first-hand, she felt pretty crappy before we even saw any symptoms. And that was peanuts compared to the stomach bug, a few days later.

But five days of having both kids at home with e-baby sick as a dog reminded me (once again) that I am not cut out to be a stay-at-home mom. Matrix algebra is a whole lot easier than parenthood.
Posted by Cat at 2:43 PM 4 comments:

E-baby was sent home from daycare today with a fever, feeling like rot. She went straight to sleep, and an hour later woke up screaming hysterically. I think it was when the fever broke, but then it went back up again. She's been taking Tylenol and Motrin alternately, but they don't seem to be helping much. She hasn't eaten lunch or any snacks all day, but she vomited this afternoon. She just feels rotten.

I hope she can get some sleep tonight, but I don't think it'll be a restful night for anyone. And like some kind of salt-and-pepper-haired superhero, my mom showed up just in time to help out. She arrived this afternoon. Yay!

So please send some healthy thoughts toward e-baby, and especially toward Jambuca, who is still gestationally minus-five-days-old, and doesn't really have the immune system for this kind of bug.
Posted by Cat at 4:48 PM No comments:

We've been a family of four for ten days now, and are still kind of getting used to things, but there have been no surprises. A few unpleasantries, but nothing unexpected.

After we got home from the hospital, e-baby was so excited to have her new babydoll toy here in the house.

He's tiny! He cries! He coos! He looks at you! He wees for real! He's PERFECT!

She is the greatest hazard to his personal safety in the whole house. Her intentions are so good, but her execution is something short of gentle. So whenever they're in the same room, one parent has to be watching closely (and physically interfering a lot). As a result, she LOVES baby Jambuca, and is pretty angry with us. She's peed on herself (How does one pee defiantly? Just watch e-baby) three times, she refuses to bathe, she refuses to eat but wants to throw her plate (and mine!) to the floor. It's not always like that, but evenings are pretty rough around here.

Still, none of it is unexpected. I expected her also to be angry with baby brother, and maybe that's coming next, or maybe not. Hopefully it will only be a few weeks before she comes down from her battle horse and decides to eat some dinner.

Our strategy has been Dr Spock all the way-- give her as much attention as is possible (while still meeting everyone's needs, of course), if someone comes over, focus a lot of attention on her, let her "help" with baby brother if she wants to, like baths and diaper changes. That all seems to work, but there's really no way to let her carry him around like she wants to, so she's perturbed a lot of the time. Dolls are simply not an acceptable substitute.

Jambuca's been to the doctor twice this week. Monday he has regained to his birth weight plus a little, and between Monday and Friday he gained 8 ounces. He now weighs 7lb, 9.5 ounces. Not exactly a chubster, but he has chubby baby cheeks at last and doesn't look skinny anymore. That last month in utero is really all about putting on layers of fat, which is what he missed out on in coming early. But the kid can EAT. He's making the most of life on land.
Posted by Cat at 7:25 AM 5 comments:

The Best Article of Baby Clothes, Ever

Of all the baby clothes we have for Jambuca, hands-down my favorite is the man-dress. It's the most practical thing ever. 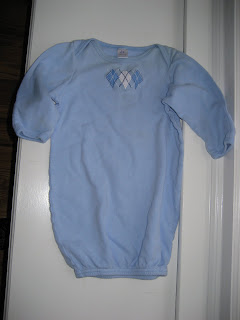 It's like a sleepy-sack, but completely open at the bottom. When he's tiny, his legs can stay curled up inside like a frog. As he gets bigger, he can stretch out long. Midnight diapering is easy because there are no snaps or zippers to confuse a bleary-eyed parent. It should fit for a long time, too!
We have three man-dresses, and I think I may have to dress him in them until Kindergarten.

Not only are they practical-- they're cute. I just don't know whether the manufacturer intended for them to be called man-dresses. But if anyone can make such a thing look macho, Jambuca can. 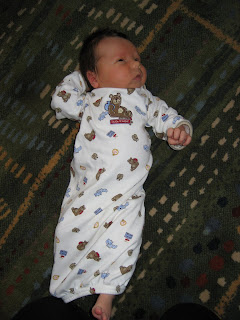 First things first, I have birthday pictures of the little dude here.

So, a-baby (a.k.a.Jambuca, not sure which one will stick on the blog) was technically due in another 2 weeks, 5 days. But hey, at 7lb, 1oz and 20.5 inches, my extrapolating skills tell me that I wouldn't have wanted to wait 3 more weeks. He was heading toward outsizing hs big sister, and we just. can't. have. that. So thanks, kiddo!

It all started out just like e-baby's, with a 2am wake-up of little teeny baby contractions that then lasted a long, long time. Around 5pm, when they were still teeny, easy, whatever kind of contractions, WHOOSH! my water broke (in SNG's office, sitting on state-owned property. Ask before you sit in any of his chairs, eh?). My doctor said to get to the hospital stat, but then my contractions didn't get a whole lot harder. I was kind of stalled at 4cm. For those outside this lingo, you start at zero cm. At 10cm, you get to push out a baby. On average, people usually dilate about a cm an hour. Four cm gets boring after awhile, and you don't want to sit around like that all night, so around 10pm my doctor said that I'd be getting pitocin (glossary moment 2-- it's a drug that kick-starts contractions). By the time the IV bag arrived, my own natural contractions had gotten pretty miserable, and I figured if was getting a drug-induced increase in pain, then I'd give the epidural another go. Last time, the epidural wasn't so hot. It kind of, well, wore off. Four hours before e-baby was born. Yuck. But everyone else says they are so nice.

The anesthesiologist was less friendly and more talented this time. Fine with me- I wasn't going to be staying for breakfast, as they say. About an hour of pitocin and still not much had changed. I was at 5cm. The nurse decided it was time to try lying on my right side. She left to eat some lunch or something. Within five minutes, the baby told me in no uncertain terms that he was on his way out, whether I was ready or not.

Five minutes, and I was at 10cm, and kiddo's head was starting to show from across the room. It took another 5 minutes for the doctor to arrive and put on her catcher's mitt. That was, unquestionably, the hardest 5 minutes of the year. Just try stopping a baby from coming out when he's determined-- ha!

One contraction consisting of 5 big breaths and kapow, BABY!

The only downside to having him come out so quickly is that the muck didn't get squeezed out of his lungs, and we've been working to get it out ever since. We are still in the hospital, sentenced to one more day of observation since he got daddy's blood type and is at high risk of jaundice. But in all he's a champ. He knew exactly how to eat from the first glimpse of the Milk Truck, and so far he's very tolerant of his big sister's EXUBERANT hugs. She's helping to squeeze the muck out, I think. 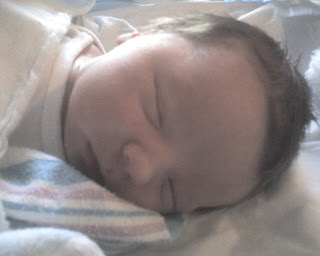 You know how sometimes the stars align, and you get everything on the "To Do" list done on the first day of the weekend? And other times the stars align and you don't get any of it done by the end of Sunday? This weekend has been the former kind. I started with a list that I was sure would take us more than 2 days to get done, but what do you know? We were done by bedtime yesterday! And now I can deal with those 4 freckly brown bananas by making banana bread. That wasn't even on the list! Ha! Take that, stars!

Before kids, we'd do everything on the list and still have time for a bike ride Saturday and Sunday mornings, and have time for a hike on Saturday afternoon, and a nice dinner out on Sunday night. And I'd cook up a dozen or 2 jars of jam, just for fun. In those days, our list would include such ambitious items as "build a new deck" and "plant a few flats of flowers" and things that we just don't even put on lists anymore.

Still, it feels so good to get everything on our measly list accomplished early. It helps that e-baby has been willing to go to bed before 9:30 the last two nights. And, just like that, I jinxed us to have all-nighters this week.
Posted by Cat at 8:04 AM 4 comments: