Last Sunday I joined my cousin in doing the Fat Flush diet-- partly out of solidarity, because she wasn't ennjoying it much and partly because I need to lose this baby weight, and heck, I'm game for a new diet.

It was pretty UN-fun the first few days, but once I got into the swing of it, it's been fine. I actually really like the cran-water regimen, but I put stevia in it to make it taste better. I think it has helped to keep my blood sugar in check. The scale has only changed by a pound and a half, but my clothes tell a different story- I'm down one full pants size after a week. That's refreshing. I'm also really glad I went to the state fair last wekend and PIGGED out on all my favorite fair foods, because now I don't feel like I'm missing out on anything.

This weekend, the fall colors are really getting turned up. I love this time of year- it is my absolute favorite season in North Carolina. Out my back window there's a riot of orange, red, pink, yellow, purple and green. Flowers could never compete just for the sheer visual real-estate those colorful leaves occupy! The weather is nice and cool, too, which makes me more inclined to play outside with the kids. THis morning, e-baby and I practiced riding her pedal bike She still has a long way to go, but there's a mtivating factor-- if she learns to ride it by Christmas, then she can ask Santa Claus for a pink-and-purple princess pedal-bike. Yes, I know, I am the LAST person you'd figure would have a princess for a kid, but there it is. Evidence of the inevitability of princess-infusion. It's OK, she can be a princess and still win the Nobel in Chemistry someday.

Jambuca really wants to walk, really wants to talk, but hasn't got the hang of either. He will be walking soon, but the talking? He does a lot of rhythmic LALALA! but so far, no hard consonants. He did sign "Milk" a few weeks ago, which was cool. He also recognizes a few other signs but I think he'll probably talk on a more "normal" schedule than his sister did. He can pretty much get whatever he wants by smiling at people. Which is just fine with me. My dad calls him Cheerful Charlie, and he really is just that.

SNG is not faring as well as the rest of us. This terrible cough he has is turning into a bear. He seems to have torn a muscle in his ribcage, making it painful to laugh, cough or sneeze. I am trying to make him go to the doctor, but he isn't having it. If he's not better by Wednesday, he'll go.

And me? I feel fabulous. Just getting over another cold, lost my voice, but HEY! I lost a pants size! Nothing's gonna get me down.
Posted by Cat at 2:53 PM 2 comments:

All About Being Three 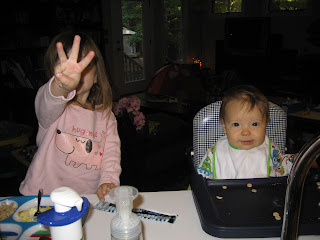 e-baby is three. She reminds me at every opportunity. She also reminds the checker at the grocery store, my colleagues, our neighbors, the mail carrier...

Being three means being able to DO IT MYSELF, DAMMIT, SO BACK OFF! (OK, those aren't exactly her words, but they're close) But really, she has a point. There are a lot of things that she can do and should be encouraged to do by herself. It's all good.

With three comes pre-school. She has moved up to the Children's House and within a day or 2, I could see changes. It's as if something clicks in a child's mind when they switch environments and bazillions of new connection form. I saw it when she moved into the 1- and 2- year old classes at daycare as well. The first and most dramatic clue I had was her artwork.

Exhibit A: Original e-baby art created maybe a month ago: 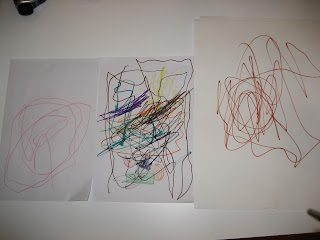 Exhibit B: Original e-baby art created after a week at Children's House: 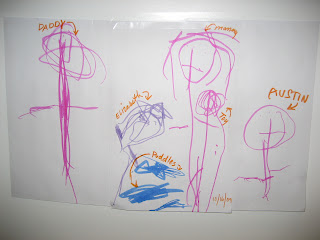 Um- WTF? Wow, kid. You've been holding on me?
I don't suppose you really need those labels I put on the pictures, but I wanted to be sure I remembered which was whom.

So far, three is fun, but then that's no surprise. Every age has been fun. I'm looking forward to this next year.
Posted by Cat at 9:41 PM 5 comments:

Angels at the Altar

Today was Baby Wisdom's baptism. I love baptisms. I love the little gowns, I love the Pass-the-Baby-Round-the-Congregation for blessings, but most of all I love the smell of a freshly-baptized baby. Makes me misty, every time. Peace was sweet enough to wipe a little of that anointing oil from Wisdom's head onto a cloth for me to put in my baby keepsake box. Because I was too drunk on baby-high to remember to do it when either of my kids were baptized.

Now, I shouldn't say so aloud, but we haven't been very consistent about taking the kids to church. E-baby pretty much thinks that church is for weddings, funerals and baptisms. Oh, and going to church is a HUGE treat to her. At the beginning of mass today, she caught my sleeve, looked up at me with wide eyes and whispered "Look! There's angels! Mommy, angels up there!" Being a little spook-able, I half-suspected that she was seeing some supernatural vision that only children can see (any of you with babies will KNOW what I mean when I say that it seems like small children see ghosts-- darn imagination makes the hair on your neck stand on end). So I looked at where she was pointing, and saw 2 altar girls, about 10 or 12 years old, flanking the priest. The girls in their robes and sandals made e-baby think she was seeing a heavenly vision.

It was so poignant, a moment of pure belief, from a mind that has no limits on what can be. The super-sentimental in me likes to think that what e-baby saw were, in fact, angels singing for Wisdom on her baptism day. Happy grace-day, Wisdom!!
Posted by Cat at 8:24 PM No comments:

In case I've forgotten to mention it, we're getting ready for a trip to Australia in November. Work is sending me to teach for 2 weeks, so I'm bringing the whole family (the 4 of us plus my parents) to Melbourne and Sydney for 3 weeks. We are all very excited. I told e-baby that we would be going to the land of koalas and kangaroos, and she said "Are we going to the zoo?" and I said, "No, it's better than that!" and she said "We're going to AUSTRALIA?!?!?"

And so those of us with passports got visas and we applied for Jambuca's passport right away. I've been fretting ever since about its timely arrival. Thankfully, I just saw that the State department mailed it to me yesterday, so it should be in my hands next week. I will feel better once all of us have all the paperwork in order. Coolest planning thing-- we will have 2-BR apartments with washer/dryer in both cities. That'll make traveling with small children much easier.

Speaking of small children, Jambuca has been crawling all over Raleigh, and showed us 2 new tricks yesterday:
1. FIRST SIGN! He signed Milk to me yesterday. He was kind of signing to me, kind of to himself, but it was definitely a sign associated with milk. He got very upset with me for not making with the milk fast enough, and signed milk at me as he started to cry. I was so proud and excited that I totally interrupted someone else's friendly conversation to tell them how great it's all gonna be, I mean, to say that he had just signed Milk.
2. Peek-a-boo! Hee has taken to playing peek-a-boo with us. He was hiding behind some long curtains at PIC and LeBon's house last night and playing peek-a-boo, and he was doing it again at home today. E-baby used to play peek-a-boo with blankets on her changing table, but for the life of me I can't remember how old she was. I was thinking around 4 months or so, but I have to be remembering that wrong.

E-baby and SNG went to the international festival this evening while I stayed at home to cram a ton of work. One condition of going to Australia is that I have to wrap up 4 BIG deadlines before I can leave. So I will be putting in some overtime between now and mid-November. Ah well, small price to pay.

Oh, and today was basil-harvesting day. This year we planted 6 basil plants that grew to about 4-feet tall, each very full-and-bushy. I made 2 quarts of pesto, and I still have half a grocery bag of picked leaves, plus about 23 more gallons of on-the-stem basil waiting for someone to cart some of it home. If I can get some more pine nuts and parmesan tomorrow, I'll make another quart or 2 of pesto. And, the bushes in the garden are still reasonably large that I might have a full 2nd harvest before the first hard freeze. Good times.
Posted by Cat at 10:35 PM 3 comments: