Some pictures of the cutest 1-day-old in America are here.
Posted by Cat at 3:46 PM No comments:

So, to pass the time waiting for a baby to be born, I have a discussion question. I was thinking about what makes 'comfort food.' So leave me a comment with your idea of the ultimate comfort food meal (regardless of whether you could actually eat it).

I finally gt around to signing up for a Twitter account, since sending updates from my phone in 160 characters or less is the most likely way that I'll ever post anything in the next few months. Besides, my 1-handed typing is better on my phone than the laptop, and I never have >1 hand free lately. So, look to the right in the sidebar for my tweets.
Posted by Cat at 6:16 PM No comments:

Some of you know Peace and Fuzzy, who are expecting their first baby soon. Well, it hasn't been an easy pregnancy (HUGE understatement) and now it looks like they're going to try and get the baby out some time this week-- about 3 weeks early. No matter how the baby comes out, it will come with higher-than-your-average risks, and I guess I should just admit here that I'm scared for my friends. If you pray, or if you meditate, or whatever, please send up a thought for Peace, and for Fuzzy, for their baby, and for her doctors to do everything they can to keep everyone healthy.
Posted by Cat at 9:02 PM No comments:

Eventually Things Will Slow Down

I can't believe it's been so long since my last post-- sorry about that-- but I haven't slowed down much at all. My mom is going home in just over a week, and then a few days later, I'll be back at work. If things seem hectic now, I dread what they'll be like then.

We've been having fun and getting lots of busywork done. I got the baby announcements printed up (finally) and I might even get them sent out before Jambuca's first birthday. E-baby has adjusted really well to sisterhood, although I am really, really tired of getting up at night to help her get her pants back on when she's gotten up to pee at 3am. Baby brother wants to eat at 10pm, 1am, 3:30am, and 5am every night. To compound the sleep troubles, she is uninterested in her afternoon naps since we switched to daylight savings time. When she's at home, I only get good sleep when she takes a nap and someone else takes Jambuca for a couple of hours. Losing that will be really, really tough to handle. I have been making up for that relaxed, refreshed feeling with girl scout cookies.

Next week my dad comes to town, and the next weekend is Jambuca's baptism. We're all really excited about dad gettting to finally meet the baby, and I'm sure my mom is more excited than any of us.

This is a really boring post because I'm pretty much running on caffeine and sugar, so I'm going to go bury my brain in another terribly scripted episode of Madeline. The lyrics for the songs in that series make me twitchy.
Posted by Cat at 6:01 PM 3 comments: 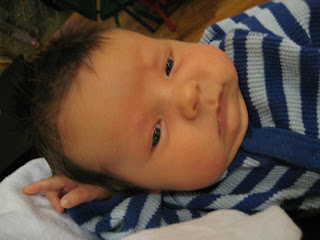 Yesterday was Jambuca's one-month birthday, and I didn't even turn on the computer the entire day, so I didn't get this post up until now. Happy monthday, baby boy!
In the last week he has entered positive numbers for his gestational age, and there must be something special about that because he has also just exploded in his growth and in his awareness of the outside world. Remember those pictures from the hospital? Skinny arms and legs, small round cheeks, tennis ball head, no butt at all. Now? HA! Let's just say that SNG has taken to calling him New York Superfudge Chunk. E-baby calls him Chubby-Love. I can't stop gumming his big fat cheeks and tickling his 2nd chin. Even his shoulders are chubby. It makes sense because for the first three weeks of his life, all he did was eat, sleep, poop, and pass wind. He's still passing a lot of wind. A LOT. It's like Ooooooooklahoma in his pants. He's still eating and sleeping a lot, too, but he's spending a lot more time awake and looking around. The most interesting thing to look at is the cabinet full of coffee cups. That's my boy.
Now, I wouldn't want you to think "Oh, no fair, she's getting so much sleep with a newborn!" No, sadly, I'm not getting nearly as much sleep as I did with e-baby. He sleeps a lot, and the entire time he's sleeping, he grunts, yells, groans, makes choking sounds (scares the heck out of me), gurgles on spitup (which also sounds like drowning, and scares the heck out of me), and squeaks. There is no sleep for anyone else when Jambuca sleeps. Oh, and he wants to eat every 2-3 hours. Just like when he was born. The longest he's ever gone for a stretch at night is a hair over 3 hours.
Still, it's no worse than I'd expected, and he's had no signs of colic thus far, so I count myself very lucky anyway. Plus I'm still getting a nap every afternoon, which does wonders for my outlook on life.
OK, OK, enough chatter. I know what you're really here for-- the pictures are here. :-)
edited to add: at Jambuca's Brazelton assessment today, he was 10lb 11.5 oz, and 22 in.