The Joy of Cooking With e-baby

This evening, even with evil Dora yelling at her from the TV, e-baby was more interested in developing new recipes in my kitchen that would make her restaurant patrons happy. She told me I was the waitress, and to get her some ingredients.

Last weekend I gave you a recipe of my own for using up excess cream cheese in your refrigerator. This week, I give you three e-baby originals. If she becomes famous someday, remember you saw them here first.

Also, for the record, all I did was provide the supplies she asked for. The creative mastery and execution are entirely hers. All recipes are made to serve 4.
Raspberry Marnies
4 big raspberries
4 baby carrots
Put the raspberry on the tip of the carrot like a head, so it looks like a little person whose name is Marnie.

Marshmallow Puffins
4 raspberries
2 marshmallows
a spoonful strawberry preserves
Slice the marhsmallows in half the short way (across the beltline of the marhmallow? Slice the sagittal plane? Just see the picture, OK?). Use each marshmallow half as a platform and smear a bit of preserves on it. Then rest a raspberry on top.
Chef's note: It does not need to resemble a real puffin. Just needs to make a "puffin" sensation in your mouth when you eat it.

Cheese Bonnets
1 stick of mozzarella string cheese
4 grapes
1T vanilla custard, prepared
4 fresh pomegranate seeds
4 toothpicks
Cut the string cheese in half, and then slice the half into 4 pieces. Eat the uncut half.
Dip a grape in vanilla custard. Attach the cheese to the grape (dipped end) with the toothpick. Rest a pomegranate seed on top like a fancy lady's flower on a white bonnet. 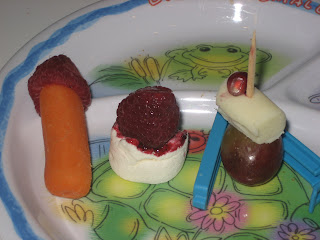 After she had finished, and her customers had all eaten their fill of her culinary delights, she told me,
"Well, I've been mostly cooking, so I'd like to rest up and play now."

Why Texting is Better Than the Phone

Scene: An office supply store, prematurely decorated for Christmas. Kids hollering and playing a toy trumpet loudly, employees giving the stink-eye.
"Hey, should we do the grocery run while we're here? What time is (so-and-so from out of town) getting here today?"
"I don't know-let me check"

(Option A: the phone call)
"Hey, we were thinking about plans for the day, and wondering whether it made sense to go to the grocery now or later, so what time do you think you'll be getting here? PUT THAT DOWN RIGHT NOW. NO, YOU MAY NOT HAVE THAT IT IS VERY EXPENSIVE AND WE ARE NOT HERE FOR TOYS Sorry, go ahead."
"Oh gosh, I'm not sure how far we are from leaving, and even then, I'm not sure how far it is from here to your house. We will probably stop for lunch along the way. If you need to do some things, go ahead, because we haven't left yet and it will be awhile. The last time we did that drive there was some traffic, but oh, that was a weekday. So probably it'll be an easy trip. I don't know how far it is, though."
"SIT ON YOUR BOTTOM. YOU MAY NOT STAND IN THE CART_SEAT. NO. ON YOUR BOTTOM, PLEASE. ON YOUR BOTTOM. THANK YOU ok, just roughly what time do you think? NO YOU MAY NOT. SHHH. MOMMY IS ON THE PHONE. PLEASE JUST WAIT A MINUTE."
"Gosh I don't know, maybe 2? 3? Later? How about we call you when we get close."
"How far does the GPS say you are? I AM STILL TALKING ON THE PHONE, CAN YOU PLEASE ASK YOUR QUESTION WHEN I AM FINISHED? sorry, go ahead"
"Oh, OK, well let's see... turning it on... Let's see. We're 4 hours away now, plus lunch, so we'll be there in about 5 hours."
"YES, NO, WAIT, I MEAN NO, YOU CANNOT CLIMB ON THERE. ok, thanks - see you then!"

Once in awhile you meet people who Do Not Text. They know how to, but they won't. I appreciate a conversation as much as anyone else, but really, which option seems nicer?

This Thanksgiving, I am thankful for SMS.
Posted by Cat at 9:11 PM 4 comments:

Our Guy Fawkes Day party was last weekend, and we had a blast. It was great to see friends, watch the kids as they get older and an play together more, and burn stuff in the backyard. 'Cause that's the real reason we celebrate, after all. S'mores this year were not as good as usual, mostly because Hershey's miniatures are really, really crappy ever since they stopped using cocoa butter in most of their chocolate, turning it into a chocolate-flavored food. And don't even start on the b.s. that Hershey's was never good-- plain old Hershey's milk chocolate was tasty. Krackel and Mr Goodbar used to taste creamy and delicious. They weren't Belgian, but they were good. Now they taste like wax. They don't even really melt in your mouth. It's all wrong. I know that this change happened about 2 years ago, but last year we had Ghirardelli and Resse's peanut butter cups, so we didn't notice until now.

Monday I flew to DC, and spent a few nights at L'Enfant Plaza. Usually when I go I stay in Rockville because that's where our regional office is. But this time, I was downtown. It was magnificent. Right next to the Smithsonian castle and the National mall, a hop on the Metro to the White House, good restaurants. I was reminded why DC is such a tourist destination. I think I prefer it to Manhattan- more places open to the public, and less crowded.

Mix all but the 2nd part cheddar in the kitchen aid, low speed, until it's all well-blended together. Divide into small or medium ramekins (mine are 16 oz) and sprinkle the last of the cheese on top. Bake at 350 for about 15 minutes, or until bubbly.

I made 6 ramekins, and baked 2 of them The rest are waiting in the fridge.
Posted by Cat at 10:37 PM No comments: