Watch Me Resist the Temptation to Entitle This Post Philadelphia Freedom.

So I'm teaching in Philly this week, and SNG is in New Bern with e-baby for a business trip of his own. His parents live there so it works out nicely. I'm delighted that e-baby got some 1-on-2 quality time with her Granny and Grandpa, since they usually only get small doses of e-baby. It sounds like they've been having a terrific time together. Well, SNG had a rough start, what with forgetting to pack e-baby's milk and with some logistical troubles on how to take a pee-stop on a road trip with a baby in-tow (and no stroller). Still, he'll get it all sorted out before the next time.

My own trip has been hot and cold as well. Yesterday, I dropped off e-baby at daycare and took a picture of her with my phone. 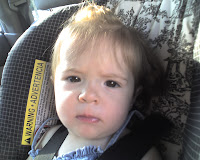 Well, I couldn't leave with that sad little face in memory, so I went back and played with her over lunch. We had a great time, and I left with a happy baby mental image (no picture this time, though).

My flight was on time, but once I got on the Avis bus, I suspected something was wrong. It was the most crowded Avis bus ever. At the 3rd airport stop, we had to leave passengers behind because there was no space for them. The driver ambled-- no, he crawled-- to the Avis location and crept at 2-3 mph through the "Preferred" lot. Most of us on the bus were "Preferred" customers. After moseying along slower than walking speed, the bus (with us still on board) LEFT THE AVIS LOT. We circled around. We window-shopped at the terminals. We went BACK to the Avis lot and circled some more. Passengers kept asking the driver what was going on but he wouldn't talk to anyone. Around that time I noticed the lines snaking out the door of the Preferred office into the parking lot, and the lines out the Peasant Avis office snaking toward the Bus Exit. We were released from the bus and queued up for our car assignment. My car, it turns out, had already been assigned and we had passed it, contract on the dashboard, several times from the bus. 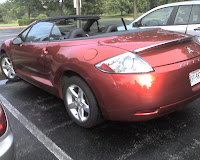 The best way to describe the experience of driving a Mistubishi Eclipse Spyder is as driving the car of your friend's blond-haired teenage brother who listens to rap music and wears his hat cockeyed-sideways with a sweatband on underneath. It has mesh in the headrests. It has a massive subwoofer in the backseat. I can't see over the dashboard very well. I can't see out the side window very well either. Still, I love driving a convertible so I'm making the most of it.

After spending two hours getting to the hotel, I had birthday dinner at a chinese place and read a book while the waitress gave me a look that clearly said "It's not polite to read at the dinner table" but she didn't effect any behavioral change from me.

Tonight I "licked the windows" at the King of Prussia mall and had soup & salad for dinner. It was so luxurious that I didn't buy anything and it was OK. Now I'm watching back-to-back special documentaries on the 9/11 attacks. Birthdays will not be the same again for a very long time. Speaking of which, tomorrow is J's bday, so happy bday, amigo.

SNG sent me a picture-mail from New Bern that I will share with you. 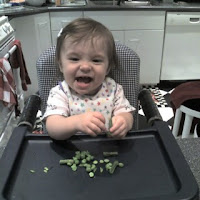 I can almost hear the GUFFAW - SQUEEEEE!
Posted by Cat at 8:57 PM

After traveling with E for a month, i can only imagine how difficult it must be to be without her. I still get sad when I take Miss C to day care! You're doing great! Happy Birthday, YBFF!

I'm way late, but happy birthday! Glad you've been having some grown-up time on your own, even though I know you miss e-baby like crazy.
I always thought it was funny that the French term for window shopping is window licking. What's up with that?