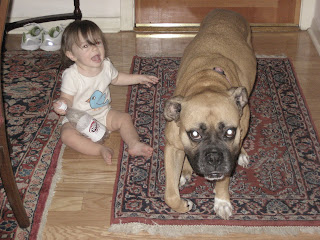 We had a terrrrrrrific time in Austin. It was super-super short, but we made the most of it.

We flew out on the nonstop Friday evening after work, which was not a good idea. The flight left an hour late, which was already past bedtime, and e-baby wouldn't sleep on the plane. Once we got to my parents' house, she saw THE DOG and wouldn't sleep. We finally got her down at 2am. Thankfully, she slept until 9am so we did get some sleep.

E-baby spent most of her weekend playing with my brother's dog or trying to catch him. Thurston is one of the world's all-time sweetest dogs, and he tolerated all manner of annoyance from nose to tail. Sunday morning, she was walking around with a ball, saying "ball!" and Thurston followed her around, looking at the ball (dog loves to chase balls) but knew that he had to be gentle with The Boss. She even walked right up to Thurston, held the ball up to his mouth and said "Ball!" He didn't take it from her, but his face said "Oh I want that ball!!!!!" She eventually threw it and Thurston caught it and did the happy-boxer-dance. E-baby did the happy-e-baby dance and sang her aaAAaaAAaaaaAAaa song.

Saturday we went to T&E's house to see them and the boys. Everyone's doing great, and E's brother The Belgium Biker got married on Saturday, so everyone was working on arranging flowers and whatnot. We helped a bit and visited a bit and then headed back.

So, let's see... from our list, we saw TEAM, went to Central Market, went to IKEA, had chicken soup at Austin Java, had pancakes at Magnolia cafe, got a chrome Bevo for the Ruby-doo, drove past campus, walked around the old neighborhood, pondered the outrageous real estate prices, decided the summers are still too freaking hot, and saw the newest house that my brother is working on flipping. Oh, and Salt Lick BBQ for lunch on the plane. If I've never mentioned it here, the Austin airport is top-shelf for food and shops. Almost everything is local, and not just local, but some of the best local stuff. It's worth making a 2-hour layover in Austin on your next vacation if you can.

As a bonus, we saw Twinkie #2, who was in San Antonio for a procedure, and hell, by Texas standards, the IKEA in far north Austin in just a trivial (2 hour) side trip away, so she met us up there to go shopping and get her e-baby fix. She, BTW, is looking terrific. I'm sure she'll tell us everything on her blog.

Saturday evening mom had a belated bday party for e-baby and she enjoyed her big pile of wrapping paper (and the gifts). Sunday morning we flew home, which was much better than the flight on Friday, since it was not past bedtime. E-baby was so ready for bed this evening.

She seems quite relaxed about it.
Posted by Cat at 9:33 PM

Sounds like you had a wonderful weekend! Hugs and kisses to DOD and Tuti!

Glad you guys had a great trip, 2 a.m. bedtimes and all. Sounds like a lot of fun.