Because you know, I've been a parent for 2 weeks so obviously I know everything now. Ha.

e-baby had her 2 week appointment when she was 10 days old. I'm so proud of her: she can track sounds and sights with her head, she knows my voice from other voices, and she's as strong as a teeeeeny-tiny ox. When the doctor put her down on her belly to see whether she could lift her head, ... she... DID A PUSH-UP! The doctor was so impressed and said that she is ahead of her age on all the tests. What a clever baby. She's going to be ready for the Iron Kids series before too long.

What have I learned in 2 weeks? Well, for anyone who might be having a baby, here goes:

1. Take help from anyone willing to give it. Assuming, of course, that it's someone you trust. It's surprising how hard it is to grab a cup of coffee or a glass of water when you're nursing, diapering, and rocking the baby for 2 hours, only to rest for an hour and start the cycle again. For the first week, all you do is feed, diaper, and rock the baby until she's well asleep and then you get an hour or 2 to get that cup of coffee. If you have someone to help you, like bring you an apple or whatever, use them. They don't even have to hold the baby, but if they have very clean hands and aren't sick, you could let them do that when she's crying inconsolably and you have to go to the bathroom.

2. Same goes for getting out of the house. OK, maybe I'm worse about this than most people, but I hate idleness. Being in the house too much makes me bonkers, and so having someone who could watch the baby while I go outside and walk or go to Eckerd's or even just go put gas in the car is a big help.

3. Get a rocker or a glider for nursing and rocking the baby to sleep. Make sure it is sized right for you. Make sure it has a high enough back that you can lay your head back and fall asleep. Because you're gonna be tired.

4. Get a Snugli. Hopefully someone will give you one as a present because they aren't cheap.

5. Shower every day. There will be some time of day when you are certain the baby's sleeping well, so put a monitor in the bathroom and get cleaned up. Why do I say this one? Because you will get inexplicable depression. You'll start crying for no reason at all (the reason is hormones, but that doesn't matter because you're still crying) and your brain has to find a reason for the sadness. If you can rule out things like personal hygiene and lack of nutrition, then you're less likely to spiral into self-pity. Self-pity will lead to more depression, which is not just the hormones, and you really don't need that. The baby doesn't need that either. If you can keep the perspective that you and the baby are both clean, well-nourished, and getting at least some sleep sometimes, then you can also keep the perspective that the sadness is just hormones and that it will eventually pass.

6. When you do get weepy, know that it will probably be at the same time(s) of day most days (mine are mid-morning and in the evenings, which happen to be e-baby's fussy times of day. Awesome.). Talk to someone if you can, or write about it in private, to keep you from getting too inwardly-focused. Or take a walk. You won't be mad at the baby: she's too perfect. But you'll redirect your frustration at everyone else because that's the only safe thing to do. And that's OK. Just try not to leave a trail of blood and tears behind you because it'll probably be the people you love who you take your frustration out on.

So if you read between the lines, you'll have a clue what my week has been like. She's the most beautiful and charming person n the whole world to me. But even though she's less fussy than the average baby, and things could be much harder as far as sleeping (she takes 2 hours to get to sleep on a good night, and she wakes up once or twice to eat, and sleeps otherwise), we're so tired. I'm cranky a lot of the time, although some things will cheer me up right away, like taking a walk or...

I jogged yesterday! Yay! Hooray! I did 2 miles and it felt SO GOOD but I didn't try to run further than that because I wanted to stop while it still felt good. I'll work on adding real distances after another week or so. For now, the muscles have to remember the motions. But yeah, it felt great. No pain. Up until the end of last week, bouncing felt pretty bad so I walked. Little by little, the walking felt better and easier, and finally got too easy so I knew it was time to run.

And so we begin week 3. Here's a new picture. Cute little froggy, isn't she? 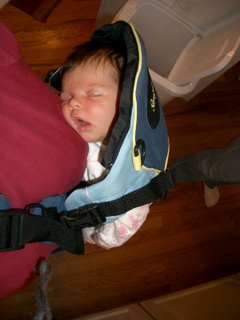 Thanks for the advice - you're not the first person who's mentioned the "shower every day" thing to me, and that is one that I definitely plan to stick to. (Have you seen my hair if it goes unwashed for more than 24 hours? It looks like the Exxon Valdez crashed on my head. Terrifying.)
Sorry you've been a bit weepy, but at least you know it's normal, and it sounds like you're keeping your perspective on it. I am a bit worried about that for myself, because I tend to be a bit moodier than you (or heck, most people for that matter), so I'm afraid that I may be a blubbery mess when I'm post-partum. Poor Dave.
Congrats on the jogging, I'm sure it helps.

Ahhhhhhh, the memories...Been there and done that a couple of times. Keep your perspective, babe, right now she is completely dependent on you guys but in no time at all, sorta, she will be a peer and you'll have long conversations, (and rejections) from a good, life long, friend...all grown up. Then all this lack of sleep thing and little or no "My Time" will be worth it by the truck load. Gird yourselves, it will take about 18 years or so. Right now, its all about HER. Love ya, hang in there!! You're doing a GREAT job!! Illegitimi Non Carborundum...
Tita