Mom went back to Austin yesterday, but I think we'll be OK. She left us enough frozen meals to get through three winters, and I learned a number of baby-soothing tricks from her along the way. Right now, my favorite one is to pat-pat-pat the baby on the toosh to settle her when she is frazzled. It works really well, but you have to do it for about 4 hours before you can walk away from her. She appears to sleep but as soon as you stop patting the toosh, she wakes up and roars. She's a lot like a baby lion cub. When she's mad, she growls and roars and opens her mouth big to show you her big, scary teeth, but all she has are gums, and she stomps her tiny feet and no matter what she does, she can't be scary, but she sure as heck tries. Like this: 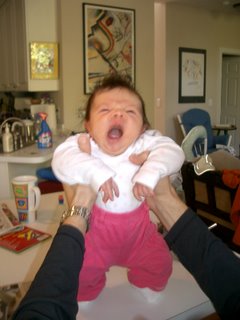 I've posted 2 more sets of pictures on Flickr. I went ahead and got a real account because I decided to eventually put other pictures up there too, like vacation pictures and such. But for now, it's all about e-baby.

I cannot get over how much she looks like your mom.
And that mid-roar photo is hilarious. Such a teeny-tiny bundle of fury. :)
Hope you survive your first week sans-grandparents ok.