My tiny baby boy is two. Never was there a sweeter, more endearing boy. You know, except when he hasn't had his beauty sleep.

We had a birthday party while my parents were in town, which was fantastic fun, and just like my thank-you notes, this blog is running very late. Things haven't slowed down enough to be able to sit and write for more than a minute or two before I have to sleep, exercise, shower, feed someone, switch a laundry, get to work, put someone else back in bed, or pick up the exponentially growing pile of clutter in the house.

Oh sure, all those things are looming now, but I want to get this down before the next month officially begins.

Jambuca is still average weight (50%), and is slightly taller (65%) for his age. On his 2nd birthday he was half of 5'10", which means he'll be roughly SNG's height when he grows up. E-baby was roughly half my height, so it's only fair. He is able to do all the things on the 2-year-old questionnaire that his doctor has us fill out (fine and gross motor skills, communication, basic problem solving, etc) but he is very hard to understand when he speaks. I know he can make all the sounds, like 's' because he goes 'SSSSSSS' when he sees a picture of a snake, but he pronounces 'Star' as 'Lar' so he doesn't seem to know when to put the right sounds together. He can say 'Yay' but also pronounces the color 'Lellow.' If I still can't understand him in 6 months, I'll ask for the daycare's speech therapist to have a listen. It might be just an unfair comparison after e-baby and her poetry and songwriting at this age.

His favorite things:
Daddy
Dogs
Pajamas (his own)
Shoes (anyone's)
M&Ms (at my office)
Little toy mice (from the Hideaway Hollow series)
Cars, trains, helicopters, boats, and any other Things That Go.
The dollhouses
Play structures
e-baby, the coolest big sister in the world (I catch him striking a pose next to or behind her so that he looks like her stunt double)
Mommy 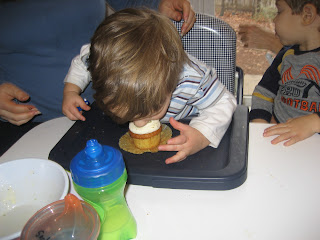 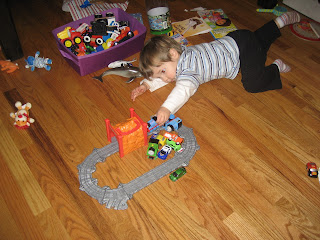 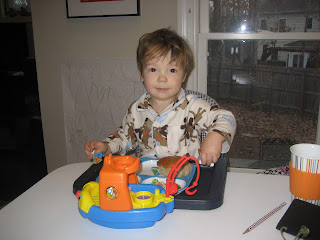 Thanks for letting us be a part of the celebration, B-Boy had a blast! Glad Jambuca enjoyed the Thomas the Train tunnel set, I hope he liked it as much as B-Boy loved the Red star balloon you sent him home with!

My guess is that, language-wise, Jambuca is much more on par with an average 2 year-old boy. And there's nothing wrong with that - he manages to communicate just fine even without perfectly enunciated Shakespearean English.

So glad we got to be there for his party, and I love that first pic of him face-diving the cupcake. Hee!