Tomorrow afternoon SNG, Peace, Fuzzy, the 2 dogs (Goofch and DOTi), hopefully 2 kayaks, lots of luggage and I will load into a rented minivan and drive ~24 hours over 3 days to a week's vacation in Marquette, MI. SNG's family owns a house on Lake Superior right on the water, overlooking Partridge Bay and Partridge Island. My parents are also driving up with their kayaks. The six of us will have a lovely time hiking, biking, kayaking, picking wild berries, watching the storms roll in across the Lake, seeing sunset at 11:30 pm, ...

Monday this week I went in for a late utrasound (27 weeks) and got some CUTE pictures of IHPE's little face: 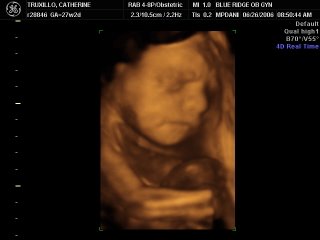 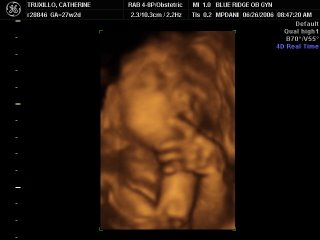 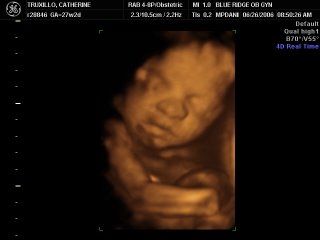 Look at that nose! Either it's squished flat, or our girl will have a right-on schnoz! So cute.

Anyway, as you'll recall, between 20 and 24 weeks, I was super-hungry, especially for sweets, possibly due (in part) to taking a glucose tolerance test (which I passed). When they did my 24-week checkup, I had gained 8 pounds and when the doc whipped out the tape measure and measured my belly from the base to the top of the uterus, her eyes bugged out of her head like Large Marge. She insisted on another ultrasound to see whether the baby was a giant, or I had too much fluid, or something like that. I Was Scared. Scared straight!! No more sweets for me! I stopped eating all those brownies, cookies, muffins, candies, cakes, ... and over the next 3 weeks, did not gain an ounce. I am not dieting, I eat when I am hungry and stop when I am full, but I'm not eating junk food. In fact, 3 1/2 weeks later, I'm still the same weight I was when the doctor went all Marge on me.

That isn't to say that IHPE is the same size. I can tell that my waist has expanded even further, but my behind has shrunk back to its pre-20-week size.

So anyway, when I went in for the ultrasound, they found that she is 61st percentile for her age (2lb8oz) which isn't at all unusual, and the fluid is normal. She just had a really quick growth spurt. But my belly measures 32 weeks. I asked how this was possible. It's just the way I carry her, the doc said. Near as I can figure, it's like this:

Now put that basketball on a very tight membrane, or a coffee table. It sticks up further. Same size basketball, but less space for it to settle in. This is me. As I've noted before, short girls don't have a lot of room for babies in there.

So, it looks like I gained 8 weeks' worth of weight in 4 weeks, and now I'm in a slow growth period. I'm expecting to resume weight gain (1/2-1 lb a week) soon. As long as I eat when I'm hungry and avoid junk food, and continue with my walking, I can only guess that everything will be just fine.

By the way, remember how I was bemoaning the jerks at airports who don't lift a finger to help The Pregnant Lady (and even the jerks who try to run us over in cars!)? Well, I think that phase is over. The last 2 trips I've been on, everyone has been really helpful. I guess I just wasn't big enough before. Now I probably scare people into thinking I'll topple over if they don't grab that suitcase off the security conveyor belt for me.

In other news, I learned this week that I'm rh-negative, and SNG is positive, which is a gentle way of saying that if we have a 2nd baby, my body might try to fight it off like a disease. Yikes. So, to prevent this from happening, they'll give me an injection of some cold, thick substance on Friday morning that will prevent the production of anti-baby antibodies. Then they'll do it again when baby is born. And again if I get pregnant again. At $133 a pop for the medicine alone, my insurance is trying to refuse to cover it. Grrrrrrrrr. Where's Nader when I need him?

I'll try to blog from Marquette. Happy 4th of July to everyone!

Love those pictures! So cute!
The RH thing reminded me - did you opt to do the screen for cystic fibrosis? I did, even though I know it's unlikely since Dave has no family history of it as far as he knows.
It's very cool that people are helping out the Pregnant Lady. I imagine flight attendants are starting to get nervous when they see you board, too. :)

We didn't get the screen, although I considered it very seriously. SNG has no history, and it's quite expensive. Another one of those things insurance won't cover. If she's got it, we'll find out when she's a baby.

I didn't even think to ask if the CF screen would be covered by my insurance, I just assumed that it would be since they lumped it in with all the other bloodwork that they're doing. Oops.
It is really unlikely, since not only do both mother & father have to carry the gene, they have to have the exact same strain. And there are something like 300 different strains that have been identified so far. So definitely, the odds are against it. But you know I tend to be kind of panicky & anxious about things, so anything that helps me relax while I'm pregnant is totally welcome. (Hence my recent obsession with prenatal yoga.)
Oh and btw, I can't believe that your doctor freaked out over the size of your belly when she knows that you're on the petite side to begin with. Weird.