Here's Pirate Tony outside the Geodome: 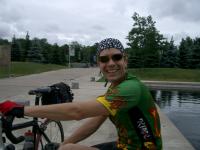 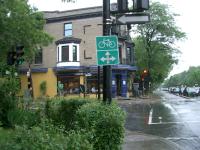 Blogger is giving me trouble with postings, so I'll put the pictures for this Dear Diary entry in a couple of different posts.

Dear Diary, Thursday June 16
©Today we got to ride our bikes. We rode around Ile Notre Dame and saw the biosphere, and then we rode over to my company's local office to have lunch with a fellow employee. Now we can expense the meals for the day. International Per Diems, baby, oh yeah!

©When we arrived at the office we were allowed to sneak our bikes up the freight elevator and hide them in the coat closet while we went to eat. The security guard told us he would be stabbed if his manager caught us with bikes in the bldg…

©I won’t mention that we had 4 flat tires among 6 bikes. Did I say anything about flat tires? No, of course not.